There was a time when a good advertisement was measured by how much it increased profit.  Actually, that may not be true; it's probably too utopian.  Perhaps there have always been false indicators of the successfulness of an ad campaign.  In the year 2015, that indicator is (you guess it) social media.  And with the biggest and most coveted commercial spots just behind us, let's take a look at how some of the most successful advertisement fared.  Perhaps we will be able to glean something from these ad giants.  (Please read the sarcasm with which that was typed.)

First let's talk about why we are even talking about social media.  The fact of the matter is that word of mouth always has been and always will be the best source of advertisement.  It is fact.  But, because the NSA is the only one who gets to listen in on other peoples' conversations, we can't analyze what words people are acutely speaking with their mouths.  That's ok, because we don't actually talk to people any more anyway.  Social networks are the next best/next big thing.  So, that is what we analyze.  It's not content, quality or social importance that makes a "good" advertisement; it's whatever makes people make noise that "matters."  In other words: A commercial is "good" if it gets people talking (on social networks).

Marketing Land with Engagor put out a nice little infographic showing just how companies fared in the 2015 Super Bowl Commercials.  You can take a look at the full infographic by clicking on the below image, but I wanted to show you who came out on top. 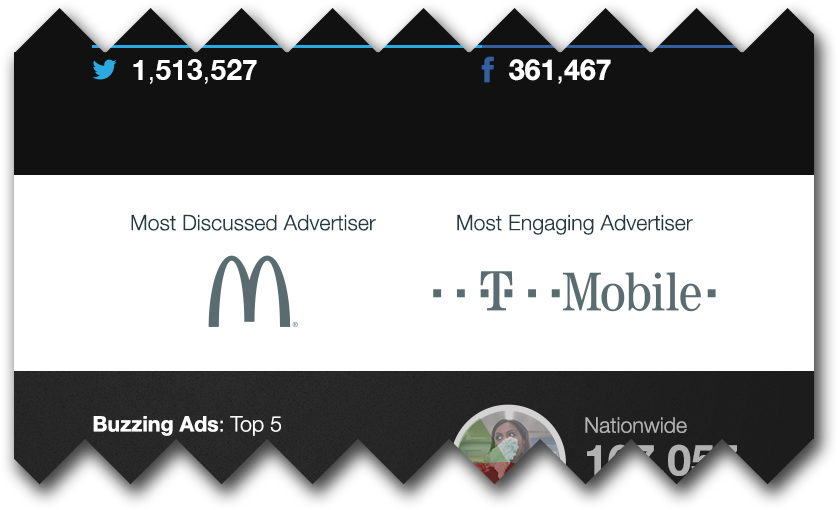 (T Mobile did a better job of responding on social media.  McDonald's was clearly mentioned more.)

If ever there was a company who did not need a boost in their brand awareness, it is McDonald's!  My guess is that they will see no increased profits from their Super Bowl commercial spots even though they costed $4 million for every 30 seconds ... and that was just the air time!  At best, I would imagine that this industry giant only played defense with its ads in hopes of keeping (or maybe achieving) the edge over their competition.  This is a problem because that is the least effective way to use your commercial spot.

Because McDonald's was by far the most talked about advertiser, I will add to the hype and focus on them.  They ran two types of commercials: Funny and Endearing

Funny
Comical commercials are great; I love them.  Comedy can be a great way to promote brand awareness.  The thing is this: McDonald's need NO MORE brand awareness!  The golden arches are still one of the most well known symbols worldwide.

Endearing
Commercials that tug at your heart strings are aiming at brand loyalty (rather than awareness).  They want you to chose McDonald's over Burger King because they are a sweet company.  The menu, quality and price are pretty much the same, but McDonald's is really nice and family-focused.  This commercial just told me so.

How to Advertise on the Super Bowl ... sort of

When it comes to nationally televised commercials, you should really take advantage of your national audience and introduce something new.  Got a new product?  Starting a new company?  In a new industry (remember the first GoDaddy commercials)?  You have got to introduce new clients into your world.  The truth is people go to fast food for convenience.  They do choose one over the other because of loyalty, but loyalty isn't swayed by commercials, though it can be introduced.  McDonald's needed to target the younger audience who is about to get their drivers licences and (for the first time) drive themselves to a fast food restaurant.  But, they all TIVo-ed the game and skipped the commercials!

So, what should they have done?  Ironically targeted the very audiences they had: Dads.  They should have targeted dads; not families.  They should have made them feel special, not silly or sappy.  They should have said something new.  They should have introduced something that would encourage dads to bring their young burger eaters to McDonald's.  Something crazy like: "Dad's eat free."  There you go, "This June Dad's get one free meal with the purchase of one or more kids meal."  What a concept; no dad would go to Burger King the whole month, and a new generation of kids would be eating McDonald's because Dad's too cheap to pay for his own meal.  And why should he!?  Why, when I grow up, that's where I'll take my sons.

Oh right, we were supposed to be gleaning.  Here's my take on the whole fiasco.  There is no need for you or me to advertise on the Super Bowl.  It's too expensive and it doesn't work.  What you and I need is still brand awareness.  The giants got their awareness not through Super Bowl commercials but through consistent advertising.  There are tons of local advertising opportunities with lower costs and higher payoffs.  But remember this maxim: Never run a single ad.  (The emphasis is on the word single.)  Don't run one ad.  Run one year's worth of ads.  It's the consistency that achieves brand awareness, and that's what the giants already have.