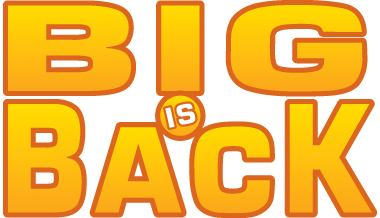 “Big is back?  I didn’t know it went anywhere.”  Well it did, and it’s back!  But don’t think that just because you missed its departure you can sleep through its return as well.  It’s back, but it’s a little different than before.

For a while the adage “Bigger is Better” seemed to be true.  That concept was applied to all areas of life.  Bigger companies, bigger houses, bigger cars, bigger designs.  Everyone wanted to work for a Fortune 500 company, live in a “mansion,” drive an SUV, and their designs were simply massive.  In more recent days the trend has reversed and a minimalist approach became pervasive.  Local businesses, loft apartments, hybrid cars and sleek designs have dominated the market.  As the cyclical nature continues, we are starting to see some of that come back around … at least in design.

Small Was the New Big

Websites- There was a time when websites were supposed to be small.  If you had a lot of information, you would have to put it somewhere else.  Designers were afraid of scroll bars because they were afraid that no one would see content below the fold.

Logos- Minimalism conquered logo designs as well.  It went, at times, a little too far even.  Logos sacrificed their creativity on the altar of simplicity, forfeiting not only clutter but graphics all together (and even appropriate fonts at times).

Advertisements- Yeah, well … advertisements have remained pretty busy.  The minimalist approach to advertising has effected the dollar more than the design.  It’s hard to argue that there is a connection between success and advertisement.  So, instead of advertising less or with less companies started advertising FOR less.  They looked for the cheapest way to advertise (which almost always means the low road).

The Imminent Return of Big

No, bigger doesn’t mean better any more now than it has in recent years.  Nevertheless, the pendulum is beginning to swing the other way.  There are some very good reasons for that too.

Information
I’ve said it a thousand times.  People want information!  If your information can fit on an index card, than you are leaving out an important part of the story.

We should tell our stories in a big way because people are listening.  Clients, colleagues, even comrades want to know about you, about your business, about your strategy, about what you do and why.

Technology
One of the reasons that design began to shrink is that it attempted to keep up with the shrinking of technology.  Computers fit on the top of your lap; TV’s fit in the back of your headrest; phones fit inside of your ear.

Design had to shrink just so you could see it.

With increased screen resolution on mobile devices (not to mention the popularization of mobile apps and custom mobile sites) the need to shrink has vanished.  In fact, scrolling, which was once taboo, has become expected and even fun!  There’s nothing quite like watching a page’s content whoosh up the screen at the swipe of a finger.

Trends
History has a way of repeating itself, for better or worse.  Whether in the world of design or the world of fashion, things come in and out of style.  Both areas agree.

It’s time to be big again.

I think it has something to do with our desire to be social, to be connected with something important, to be a part of something bigger than your self.

Do you have any thoughts on this trend?  Tell me about on my Contact Page.