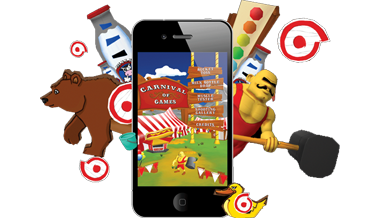 I've got a pretty cool job, but it's not quite the coolest in the world.  The coolest job in the world belongs to a friend of mine.  He is a producer at Sky Parlor Studios.  That's right; he produces games ... for a living!  They're still a new company (just under a year old), but they've already got three games out.  I downloaded their most recent app called Carnival of Games that's available on both Android and AppStore.  I thought you might be interested in reading my take on it.

As you can imagine this is the first thing that I notice.  The quality of graphics will play a huge role in whether or not I like a game or movie or website or book.  The graphics create the environment.  So, what kind of environment is created in Carnival of Games?  Well, let's be honest here.  You are NOT going to feel like you're at a carnival.  For one thing thing the place is WAY too clean to be an actual carnival (shudder).  For another thing the graphics are not realistic.

That might sound like a criticism, but it's not.  It's a high compliment.  Whether it's graphics or games we're talking about an art form, and art is not life.  It's an expression of life.  Carnival of Games is reminiscent of all the good things we imagine an old-timey carnival to have been like.  In keeping with that feel, the graphics are a bit of a throwback as well.  They do not try to capture actual reality but rather consistently express an alternate realty.  That's great!  One reason we play games is to enter into another reality.  These graphics lend themselves to that goal.

I'm not a gamer by any stretch of the imagination.  So, it's a big deal to me whether or not a smart phone game is intuitive.  I don't want it to be easy to win, but I want it to be easy to play.  If instructions are necessary they need to be simplistic.  Carnival of Games, for the most part, offered this.  They do provide instructions that are easy to understand.  Honestly, I don't think they would have been needed, but it was very nice having them.  Playing the games and tweaking my approaches were pleasantly intuitive.

I think that my only criticism here must be taken with a grain of salt.  There were a few games whose responses were not quite what I felt they should be.  Particularly the tilt function was frustrating.  With that being said, my wife had absolutely no problem when she played it.  Incidentally, she kicked my tail on all of the games.

I mentioned that learning the games should happen quickly, and that's true.  But, I don't think it is logically inconsistent to thing that mastering these games should take quite a bit longer.  When I first played the carnival games I thought it was a very nice learning curve.  After a game or two I thought that the pinnacle of performance was a little bit low, assuming I would lose interest soon.  This is, again, where my wife comes in.  Her first time playing it was better than my sixth time.  Thus the competition began.  I was able to play, learn and then be challenged.  That's the right order for proper pliability.

I do believe that competition is a huge part of any game.  Records are also pretty big.  My suggestion for making Carnival of Games more playable would be to add high-score records.  That way I don't have to remember whether I am ahead or if my wife is.  (Of course then I wouldn't be able to inflate my numbers.  Oh well!)

Overall Carnival of Games is a fun app, and I look forward to seeing more from Sky Parlor Studios.  My friend even tells me to be on the lookout for some updates soon.  I can't wait!