Would you believe that it's merely an optical illusion that it's been a month since my last blog post?  No?  Well then, I beg your forgiveness.  I have had much to say, but less time to say it, so I have kept my mouth shut.  Today, I take the time to talk about something both fun and important: Optical Illusions.  Now, I know that doesn't sound fun or important, but do not worry.  I will not ask you to stare for hours on end until your eyes cross and you see a fish, a bird or your very soul.  I just want to take some time to talk about optical illusions and how they should impact how we advertise.

What is an optical illusion?

An optical illusion is when we perceive something visually in a way that is contrary to what we objectively see.  It looks different than the way it is.  These phenomenons occur all the time and are often very helpful in perceiving a given construct.   They help us to count (ie: the arrangement of dots on a die).  They help us to measure (ie: the lengths of hash marks on a ruler).  They help us to perceive depth (ie: square vs cube).  But, every now and then, we perceive things in a way that is wrong or silly or contrary or sometimes absolutely impossible!  Let's look at just a few.

Seeing things that aren't there

Our brains like to make sense of the world.  When we see something, our brains try to figure it out.  After they see something enough, they begins to recognize it, categorize it and access it.  After accessing it enough, our brains can jump to conclusions and just fill in the blanks.  This is how we are "quick thinkers."  As anyone who has blurted out a wrong answer before the question was finished knows, we don't always have enough information to draw the proper conclusions.  In other words, we fill in blanks for things that aren't there. 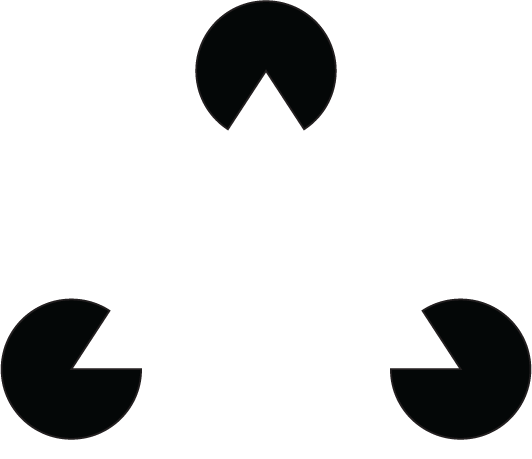 Take a look at this picture:

Q: Do you see the white triangle?
A: Of course.

Right, only there is no white triangle.  In fact, there are no black circles.  A triangle has three straight sides and three angles.  All points on a circle's rim are an equal distance from the center.  There are no images above that meet those descriptions!

We see them anyway. It's as plain as the letter on the screen, but they are not there.  How can this be?  Because there is enough information for our minds to fill in the blank.  We are far more accustom to seeing circles and triangles than we are to seeing black pack-men.  So, that's what perceive—even if they aren't there.

Not seeing things that are there

OK, sometimes we fill in the blanks, but at least we don't ignore things that are right in front of our faces right? 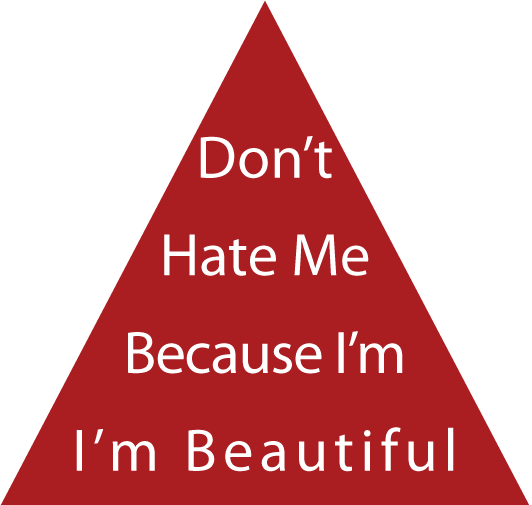 Q: What does this say?
A: Don't hate me because I'm beautiful.

Good, only that's not what it says.  It says, "Don't hate me because I'm I'm beautiful."  Didn't even see it, did you?  Which I'm did you ignore the first one or the second one?  Come to think of it, did you even really read that far down?

Had your mind already assumed it knew what it was going to say and just started looking for contradictions? Ironically a child still learning to read is more likely to read that correctly.  Why?  Because he is still relying on the reality of what he sees to construct what he perceives.

Over correcting for what we thought we saw

What we perceive goes FAR beyond what we see.  For a single two dimensional image we can perceive an entire world, create laws for that word and enforce them on the objects that we see in the image.  This gets confusing, so look at the example below and tell me which of the two coffee mugs on the right side appears larger?

The one in back, right?  OK, well ... they are both the same size and neither is in back of the other.  The very idea of "in back" or "behind" demands a third dimension, but you know good and well that you are looking at two dimensional objects.  The coffee mug above is the same size as the coffee mug below.  Why does it appear larger?  Precisely because our minds construct the third dimension.  Here's how it happens:

So, what does any of that have to do with advertising?  Well, your potential clients see things that aren't there, don't see things that are there and over correct for things they thought they saw.  This can play to your advantage or your disadvantage.  You can get more bang for your buck by creating the perception of things you don't have space to show.  You can follow obnoxious regulations without anyone noticing.  You can even gain the benefit of the doubt.

You can give the impression of things you never intended, distract from important information or cause people to assume the worst.

We looked at the examples and Kristen gave the perfect response.  "He appears shorter in the one where he has head room."  And he did!  He looked like he wasn't tall enough to reach the frame; he could "not ride this ride."  They may not seem like a big deal, but in an ad that is trying to build confidence, short is not one of your target messages.

Remember that we all approach what we see with preconceptions and will construct our perceptions of reality as well as your message based on those.  It can be hard to know what it is that you actually see and what you merely perceive, so you should always get some outside input to help find out what illusions might be lying yet unnoticed.