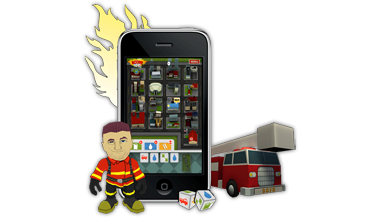 A while ago I reviewed Carnival of Games, a mobile app created by Sky Parlor Studios.  The guys over there were kind enough to ask me to review another game of theirs called Fire and Dice.  They’ve even offered to give away five free iPhone promo code to one of my lucky readers.  So, if you haven’t already, re-tweet this article with #FireAndDice to enter for a chance to win.  The game is also available on both Android and AppStore.

In Fire and Dice you are a firefighter controlling up to three fire engines.  Each round you must roll the dice and utilize the results.  A good roll will provide the resources you need such as gasoline to get to the fire, water to extinguish the fire, ladders to rescue victims and engines to get more help.  But, with each passing round, more fires appear and your resources expire.

I absolutely love this game.  It’s hands-down my favorite mobile game.  As you read this review don’t question if I am being bias; I am.  But, it’s only because I like it so much. 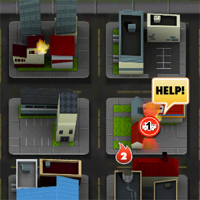 You should know going into it that the attempt here is NOT to recreate reality.  You will not gaze down at your phone and think that you are about to be consumed with flames.  This is a game; snap out of it.

The nature of these graphics poses some pretty serious problems.  There is a 16 block (4x4) game board that has to fit on a 2 inch screen.  Each block has a different graphic.  Each block (eventually) has simultaneous action.  Each block (potentially) has helpful information.  That is a LOT to fit in the palm of your hand.  Sky Parlor tackles this problem with great wisdom.

Fire and Dice doesn’t try to over detail the board; they let it just be a board on which the game is played.  The flames of varying sizes are in a constant color flux.  This helps add to the dynamics of the fire, but it also adds another element.  The flames make my turn seem exigent.  There is, of course, no real fire; there’s no real person in danger; there isn’t even a time-limit on my turn.  But, because the flames are blazing, I feel like I need to hurry, like if I don’t who knows what that fires is going to do.  It was very clever to add this element with graphics as opposed to creating an actual game changer.  The problems that a timer would create render it a hindrance, but the same goal is accomplished here with a simple graphic element.

But … it’s also a luck game.  There are times when you can play your best and have the smartest strategy, but the dice just aren’t on your side.  Sometime you will roll exactly what you need (which changes from level to level).  Sometimes you will roll nothing but water and have no way of getting to a fire.  As much strategy that goes into playing the game, it’s still a roll of the dice.  This might make it unpredictable, but it also makes it playable.

The competition might be my favorite element of this game.  I finally got my Game Center working, and I am (for now) in the Top 10!

All in all, it’s a fabulous game.  Even if you don’t win the free pro-mo code you can always purchase it or just download the free version.